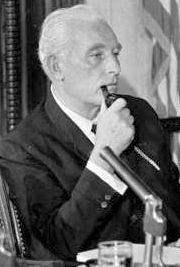 Thomas Joseph Dodd was a United States Senator and Representative from Connecticut, He is the father of former U.S. Senator Christopher Dodd and Thomas J. Dodd, Jr., who served as the United States Ambassador to Uruguay from 1993 to 1997 and to Costa Rica from 1997 to 2001.

Dodd was born in Norwich, New London County, to Abigail Margaret (née O'Sullivan) and Thomas Joseph Dodd, a building contractor; all four of his grandparents were immigrants from Ireland. His paternal grandparents were farmers in the Housatonic river valley with large commercial tobacco leaf farms located near Kent and New Milford. He graduated from Saint Anselm College's preparatory school, run by Benedictine monks in Goffstown, New Hampshire, in 1926. He graduated from Providence College in 1930 with a degree in philosophy, and from Yale Law School in 1933. In 1934, Dodd married Grace Murphy of Westerly, Rhode Island. They had six children.

He served as a special agent for the Federal Bureau of Investigation in 1933 and 1934, the highlight of his career there being his participation in an unsuccessful attempt to capture John Dillinger at Little Bohemia Lodge. He was then Connecticut director of the National Youth Administration from 1935 to 1938. He was assistant to five successive United States Attorneys General (Homer Cummings, Frank Murphy, Robert Jackson, Francis Biddle and Tom Clark) from 1938 to 1945.

As a special agent for the Attorney General, Dodd was basically a trial-level federal prosecutor. He worked primarily on criminal and civil liberties cases, including the prosecution of the Ku Klux Klan in the 1930s. In 1942, he was sent to Hartford to prosecute a major spy ring case in which five men (Anastasy Vonsyatsky, Wilhelm Kunze, and others) were accused of violating the Espionage Act of 1917 by conspiring to gather and deliver US Army, Navy, and defense information to Germany or Japan. Four of the five pleaded guilty; Dodd tried and won the conviction of the fifth man, Reverend Kurt Emil Bruno Molzahn.

Dodd became vice chairman of the Board of Review and later executive trial counsel for the Office of the United States Chief of Counsel for the Prosecution of Axis Criminality at Nuremberg, Germany, in 1945 and 1946. He practiced law privately in Hartford, Connecticut, from 1947 to 1953.

Both Supreme Court Justice Robert H. Jackson, chief prosecutor for the U.S., and Dodd insisted upon a fair and legal trial to prosecute the Nazi war criminals. Dodd accepted Jackson's offer to join him in Germany. Dodd expected the position to last only several months, but he wound up spending 15 months there. Dodd suggested Heidelberg as the location for the International Military Tribunal, since it had survived the war almost completely unscathed, but Nuremberg was eventually chosen. In October 1945, Jackson named Dodd to his senior Trial Board for the Nuremberg Trials, and later in 1946, named him Executive Trial Counsel, putting him in the number-two position at the trials. In the summer of 1946, Jackson appointed Dodd as the acting Chief of Counsel while he returned to DC. Dodd finally returned to the U.S. in October 1946. He described the delegation as "an autopsy on history's most horrible catalogue of human crime."

Dodd showed through his evidence that Erich Koch, the Reichkommissioner for the Ukraine and defendant Hans Frank, the Governor-General of Poland were responsible for the plan to deport one million Poles for slave labor. Dodd also showed evidence that defendant Walther Funk turned the Reichsbank into a depository for gold teeth and other valuables seized from the concentration camp victims. Dodd showed a motion picture of the vaults in Frankfurt where Allied troops found cases of these valuables, containing dentures, earrings, silverware and candelabra. Dodd showed many gruesome items of evidence, such as a shrunken, stuffed and preserved human head of one of the concentration camp victims that had been used as a paperweight by the commandant of Buchenwald Concentration Camp.

Final pleas were made on August 31, 1946, and the Tribunal announced its judgment in September 1946. Dodd assisted the Allied prosecuting team of convicting all but three of the defendants.[5] All but one of the defendants had claimed innocence, including Hermann Göring, whom Dodd had charged with ordering Reinhard Heydrich to set the Holocaust in motion.[12] In addition to prosecuting the individual defendants, Dodd demanded in his summation to the Tribunal that all six of the indicted Nazi organizations be convicted of crimes against humanity, on the same grounds of the crimes against humanity ascribed to the individual defendants. These six organizations are the Leadership Corps, the Reich cabinet, the Gestapo, The Storm Troops (SA), the Armed Forces, and the Elite Guard (SS). Dodd said that these organizations should not escape liability on the grounds that they were too large, part of a political party, etc.

Dodd was given several awards in recognition of his work at the Nuremberg trials. Jackson awarded him the Medal of Freedom in July 1946 and President Harry Truman awarded him the Certificate of Merit, which Jackson personally delivered to him in Hartford in the fall of 1946. Dodd also received the Czechoslovak Order of the White Lion. In 1949, the Polish government had intended to award Dodd with a badge of honor called the Officer's Cross of the Order of Polonia Restituta, but Dodd rejected the medal due to his commitment to human rights and views that the Polish government was imposing a tyranny like that imposed by the Nazis, and accepting an honor from the President of Poland would be like accepting one from the Nazis.

Dodd was elected as a Democrat to the House of Representatives in 1952, and served two terms. He lost a Senate election in 1956 to Prescott S. Bush, but was elected in 1958 to Connecticut's other Senate seat and then re-elected in 1964.

Before becoming a U.S. senator, Dodd was hired to lobby for Guatemala in the United States for $50,000 a year by dictator Carlos Castillo Armas. According to the North American Congress on Latin America, Dodd "had perhaps the coziest relationship with the Castillo Armas government." After a short trip to Guatemala in 1955, Dodd urged the House of Representatives to increase aid to the Central American country. Dodd's amendment passed, and Guatemala received $15 million of US aid in 1956. Dodd was unapologetic when criticized for his lobbying efforts on behalf of the Guatemalan dictatorship. When a Republican organizer challenged Dodd on his lobbying, Dodd stated "I am a practicing attorney and I am proud of the fact that the anti-communist government of Guatemala has asked me to handle its legal affairs in the US. Of course, I will not represent the government of Guatemala or any other private client if I am elected to the Senate."

In 1961, Dodd visited the Congo to investigate the civil war caused by the secession of the province of Katanga. In addition to his work in the Congo Senator Dodd opened what became nearly three years of intermittent hearings. The results of the three-committee staff monitoring reports of television content in 1954, 1961, and 1964 showed incidents of violence. Senator Dodd and Estes Kefauver are the two men responsible for informing the public of the effects of violence on juveniles.

In the fall of 1965, Dodd tried to get Martin Luther King, Jr. arrested for violating the Logan Act. As chairman of the Senate Subcommittee on Juvenile Delinquency, Dodd worked to restrict the purchase of mail order handguns, and later shotguns and rifles. These efforts culminated in the Gun Control Act of 1968, which Dodd introduced, including certain registration requirements.

Dodd played an instrumental role in the prohibition of LSD in the United States, presiding over subcommittee hearings purportedly investigating the drug's effects on youth. Notably, Harvard psychologist and LSD proponent Timothy Leary was called to testify. Despite that Leary urged lawmakers to enact a strictly regulated framework where LSD would remain legal, Dodd and his colleagues drafted a ban which was later adopted. This event was one episode in the prelude towards an all-out "War on Drugs" in the 1970s.

In 1967 Dodd became the first Senator censured by the US Senate since Joseph McCarthy in 1954, and was one of only six people censured by the Senate in the 20th century. The resulting censure was a condemnation and finding that he had converted campaign funds to his personal accounts and spent the money. Beyond the Senate Ethics Committee's formal disciplinary action, other sources (such as investigative journalist Drew Pearson and Jack Anderson's Congress in Crisis) suggest Dodd's corruption was far broader in scope, and there were accusations of alcoholism. In response to these accusations, Dodd filed a lawsuit against Pearson claiming that Pearson had illegally interfered with his private property. Although the district court granted a partial judgment to Dodd, the appellate court ruled in favor of Pearson because Dodd's property had not been physically abused.

In 1970, the Democrats endorsed for his seat Joseph Duffey, who won the nomination in the primary. Dodd then entered the race as an independent, taking just under a quarter of the vote, in a three-way race which he and Duffey lost to Republican Lowell Weicker. Dodd finished third, with 266,500 votes–far exceeding Weicker's 86,600-vote margin over Duffey. Months after his defeat, Dodd died from a heart attack at his home.